Home » Meet Our New Board Members

Meet Our New Board Members

Look who's new to NCG's board! 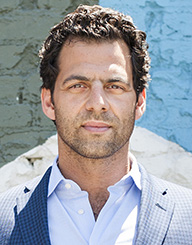 Prior to joining Knight, Danny was a principal of StorySocial, a creative design studio in Washington, D.C. In that role, he helped businesses, cities, foundations and brands more effectively collect and share their stories online and in person to build stronger communities.

He is also co-founder of Feastly, a venture capital-backed online marketplace that allows cooks to turn their homes into restaurants and promotes community connections at the dinner table. Previously, he was the chief storytelling officer for People’s District, an online oral history project launched in Washington, D.C., that collected and shared a profile of one city resident a day.

Danny earned a Bachelor of Arts from Connecticut College and a Master’s in Public Administration from Princeton University. His work has been featured in, among others, Fast Company, The New York Times, NPR, TIME, The Wall Street Journal and Wired. The Washington Post called him a “modern-day Studs Terkel.”

Danny has delivered presentations around the world and is a regular speaker on topics such as storytelling, community building and creative placemaking. He was chosen as a National Arts Strategies Creative Community Fellow and is an award-winning DJ and photographer.

Daranee Petsod is president of Grantmakers Concerned with Immigrants and Refugees (GCIR), a robust network of foundations supporting efforts to advance the rights and integration of immigrants and refugees in the United States. She has led GCIR since 1999 and has worked on immigration and social and economic justice for nearly 30 years.

Daranee began her career working with Southeast Asian refugee women and girls on sexual assault and domestic violence issues. Prior to joining GCIR, she was a program and communications consultant for foundations and nonprofits. She previously held leadership positions, including executive director, at the Illinois Coalition for Immigrant and Refugee Rights; was a program officer at the Field Foundation of Illinois, Inc. and the Sophia Fund, one of the first women’s funds in the United States; and was a policy analyst for the United Way of Chicago. She has served on the boards of the Donors Forum (now Forefront) and the Heartland Alliance, both in Chicago, as well as Asian Americans Advancing Justice in Washington, D.C. She currently serves on the board of the Forum of the Regional Association of Grantmakers.

Daranee has authored and co-authored numerous research reports on immigrant and refugee integration, as well as opinion pieces on the role of philanthropy in supporting these issues. She earned an M.A. in social policy from the University of Chicago and is a recipient of the 2014 Professional Development Fellowship from the Wallace Alexander Gerbode Foundation.

Jen is a seasoned grantmaker, nonprofit executive and leadership coach. She is passionate about building high-performing teams and world-class organizations that create positive social impact. Jen currently leads the Silicon Valley Social Venture Fund (SV2), a community of hundreds of individuals and families who have joined together to learn about effective giving and impact investing while pooling their resources and skills to support promising social enterprises. Prior to this, she was a program officer at the William and Flora Hewlett Foundation, where she collaborated with senior leadership on organization-wide strategy, evaluation and learning while also managing a multi-million dollar grantmaking program that helped hundreds of nonprofits strengthen their organizational effectiveness. Earlier in her career, Jen served as associate director in the Center for Social Innovation at the Stanford Graduate School of Business, where she now occasionally speaks as a guest lecturer, and also co-taught a Stanford MBA course. Jen has also worked for the United Nations in Geneva, the Aspen Institute, and has served as a legislative aide to a U.S. Congressman in Washington D.C. She was named a “Woman of Influence” by the Silicon Valley Business Journal and as one of Silicon Valley’s “40 Under 40” leaders. She holds an MPA from Princeton in international development, a BA in government and environmental studies from Dartmouth, and has trained as a life coach. A lifelong athlete, Jen enjoys rock climbing and mountain biking in the Sierras and coaching her children's sports teams.

Richard Tate is vice president of public affairs at The California Wellness Foundation, where he leads a multidisciplinary team responsible for the Foundation’s communications, community relations and public policy activities. In his role, Richard develops and implements strategies to further the reach and impact of Cal Wellness and its Advancing Wellness grantmaking by engaging audiences in addressing the issues central to the Foundation’s mission. He reports directly to the president and CEO and is a member of the senior management team.

Richard joined Cal Wellness in 2016 after ten years with HopeLab, the health-focused nonprofit organization of the Omidyar Group and a pioneer in digital health research and development. He was HopeLab’s first director of communications and marketing and advanced to become a vice president and member of the executive leadership team. He oversaw all public relations, media outreach and product marketing, including the successful launch of HopeLab’s groundbreaking Re-Mission video game for teens and young adults with cancer and HopeLab’s participation in the launch of the federal Office of Social Innovation and Civic Participation at the White House, where President Barack Obama featured HopeLab and its Zamzee product as an exemplar of social innovation.

Prior to joining HopeLab, Richard was a director of corporate communications for the multinational biotechnology company Chiron Corporation, through its acquisition by Novartis AG. He managed communications and media relations related to Chiron’s biopharmaceuticals business, working closely with company executives, product marketing teams, investor and government relations personnel, research scientists and patient advocates. He began his career in communications as an editor and journalist and held editorial positions at the national newsmagazine The Advocate, Citysearch.com, and the Los Angeles lifestyle magazine Buzz.

He is a board member of the Bay Area Surgical Mission and participates in the organization’s work providing free medical care in remote communities in the Philippines challenged by poverty and limited access to health services. Tate earned his bachelor’s degree in English from the University of Southern California, where he was a Deans Scholar and winner of USC’s Edward W. Moses Writing Competition. Richard has lived and worked in California since 1991 and is based in the Cal Wellness San Francisco office.

Rick Williams is the Chief Executive Officer of the Sobrato Family Foundation (SFF), one of Silicon Valley’s largest philanthropic organizations. SFF’s mission is to promote access to high-quality education, career pathways, and essential human services, as it seeks to make Silicon Valley a place of opportunity for all its residents.

Prior to joining SFF, Rick founded and was President of Realize Consulting Group, a management consultant firm focused on creating effective and sustainable solutions for philanthropic and nonprofit organizations and the communities they serve. Rick also served at the Director of the Asset Funders Network, USA, a national community of foundations and grantmakers advancing programs and policies that promote economic opportunity by helping low-income individuals build and protect financial assets.

From 2001-2005, Rick was National Programs Director at the Charles and Helen Schwab Foundation where he oversaw grantmaking in the areas of homelessness, substance abuse, foster youth, after-school services, and poverty prevention. Rick is currently on the Board of the Silicon Valley Children’s Fund and Fresh Lifelines for Youth (FLY). Previously he served as the Board Chairperson of Archbishop Mitty High School in San Jose, CA and a founding board member of Grantmakers for Effective Organizations (GEO). Rick also previously served as the Deputy Director of the Santa Clara County Mental Health Department and Director of the Santa Clara County’s psychiatric inpatient services.

January 17, 2023
We want to extend our deepest gratitude for Alice Y. Hom for serving as NCG’s Director of Equity and Social Justice for the past four years. Alice will be deepening their leadership with our co-conspirators at CHANGE Philanthropy as the new Executive Director beginning March 13th.
END_OF_DOCUMENT_TOKEN_TO_BE_REPLACED
X